Luxembourg is the world’s 12th most competitive economy

Luxembourg ranks 12th in the 2021 edition of the IMD World Competitiveness Ranking of the world’s most competitive economies. The country gained three places compared to the previous year.

The coronavirus pandemic, and the economic turmoil it created, made 2020 a difficult year for economies across the world. Luxembourg nevertheless improved its competitiveness, according to the IMD World Competitiveness Ranking.

The country is in 12th place in the ranking, the podium of which is occupied by Switzerland, Sweden and Denmark. Its neighbouring countries Germany, Belgium and France are in 15th, 24th and 29th place, respectively. 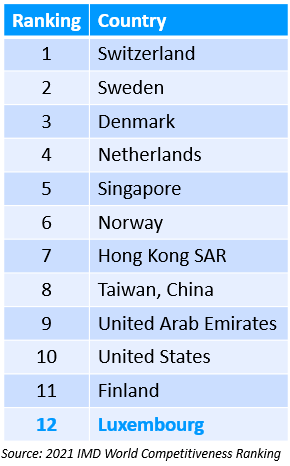 Responding quickly to an exceptional situation

Compared to 2019, Luxembourg improved its ranking by three places. “The crisis has been, for a little over a year, an indicator of the capacity of economies to respond quickly to an exceptional situation, both from a health point of view and the organisation of work. This progression therefore reflects the good capacity of Luxembourg’s economic and political players to adapt to changes and to maintain the country’s competitiveness in such a context,” comments the Luxembourg Chamber of Commerce in a press release.

Luxembourg ranks 10th for its economic performance, in particular due to its international trade, employment and domestic economy. It is also in 10th place for its government efficiency, mainly thanks to its strong performance in the fields of public finance, business legislation, and societal and institutional framework.

It ranks 13th in the category business efficiency, particularly because of its productivity and efficiency and finance. It gets its lowest ranking, 24th, in the infrastructure category where it nevertheless comes out well in terms of basic infrastructure and education.

As part of the production of the ranking, respondents of the Executive Opinion Survey were asked to select 5 out of 15 indicator that they perceived as the key attractiveness factors of their economies. Luxembourg received the highest percentage of responses per indicator for:

Luxembourg best in the world for attracting talent 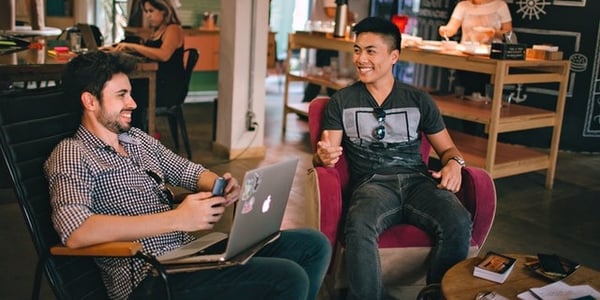 Luxembourg best in the world for attracting talent

Luxembourg is the 6th happiest country in the world 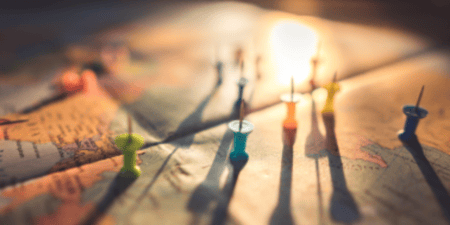